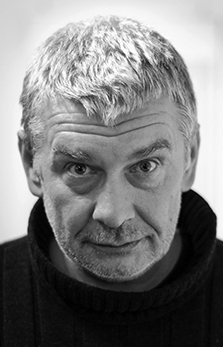 A Polish poet, fiction writer, journalist, a lead singer in bands: Świetliki [Fire-flies] and Czarne Ciasteczka [Black Cookies]. He made his debut with the book Cold Countries published in 1992 by Fundacja brulion Publishers, although he was discovered by the critics and recognised as one of the most genuine representative of the brulion generation before his official debut. He was awarded many literary prizes, including The Georg Trakl Award, The Kościelscy Award, Grand Prix in a competition organized by brulion magazine, the Jan Twardowski Award. He was also awarded with Polityki Passports Award, but he refused to collect it. He is also a several-time-nominee of the Nike Literary Awards and in 2006 his book Music of the Middle was chosen as the Kraków Book of the Month. In 2009, he received Gdynia Literary Award in fiction for his detective story Jedenaście [Eleven]. While receiving the award he said: I want to congratulate the Jury and my publishers for having such a cool writer.