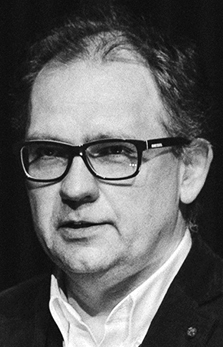 A Chief Director of the New Theatre of Kazimierz Dejmek in Lodz since July 2016. He graduated from the Law and Administration Faculty of the University of Lodz. As a student, in 1987, he joined the Independent Students’ Association (NZS) and was its active member until graduating in 1992. He was a Vice-Prsident of the NZS at the University of Lodz and was a member of its national board. He took part in the Orange Alternative (Galeria Działań Maniakalnych). As a member of opposition organizations he was several time arrested by communist police and the SB. In the years 2006-2010, he was a councillor of the Łódź Regional Assembly. He was a member of the Committee of Culture, Science and Sport as well a of Audit Committee. He is the initiator of several social projects: “Pamiętam. Katyń 1940” (I Remember. Katyń 1940), “Prawo do kultury” (The Right to Culture). He was awarded with the Silver Cross of Merit for his contribution to the World Association for Home Army Soldiers, a merit badge “for contribution to the City of Lodz”, and a Honorary Badge for “The contribution to the Siberian Sociaty”. In the years 2007-2016,he was the Director of the Polish National Centre for Culture (NCK).