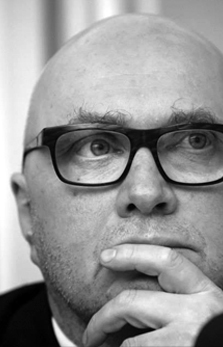 A Czech journalist and musician, working as a commentator and analyst for the daily newspaper Lidove noviny. Before, he worked for Hospodarske noviny and weekly Respekt, the latter of which he co-founded after the velvet revolution (1989) as the country‘s first independent media outlet. His main field of interest is economic politics, namely Eurozone crisis or European integration. He writes his daily blog Monitor on internet and provides analysis for Czech Radio and Television. With his lectures he visits international conferences and universities. He teaches journalism at New York University in Prague. During the Communist era he was a member of Czechoslovak dissent and signed the human rights petition Charta 77. He was involved in samizdat publishing and underground music culture. Chariman of the board of trustees of Institute for Politics and Society, former chairman of the board of trustees of Vaclav Havel Library. Repeatedly awarded the best journalist in the country (Ferdinand Peroutka Award, 2010).