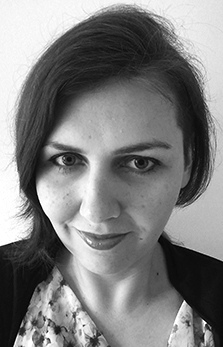 A democracy activist, one of the co-founders of the Lodz department of the Committee for the Defence of Democracy and a former member of the board. A co-organizer of all major Lodz opposition manifestations since winter of 2015, including the Black March held on October 2, 2016. She holds a PhD in Slavic philology from the University of Lodz and is a translator from Serbian and Croatian. In 2009, she cooperated with Jacek Talczewski on his film Rewolucjoniści (The Revolutionaries) produced for Biełsat, a how-to documentary on peaceful revolutions. In 2014, she was the translator of a meeting with Croatian feminist writer Vedrana Rudan, which resulted in their further cooperation on proofreading of one of Rudan’s books. She also supports such initiatives as: Dziewuchy Dziewuchom, Secular School (Świecka Szkoła), Łódzka Masa Krytyczna, and Pulse of Europe.