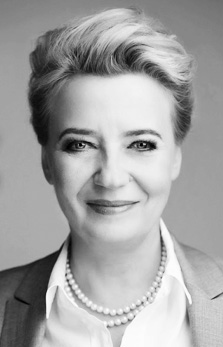 Before Hanna Zdanowska became the Mayor of the City of Lodz, she served six years as the Director of the Office of Lodz Chamber of Commerce and Industry. In 2006, Hanna Zdanowska became the Councilor of the Lodz City Council, and later the Vice-Mayor of Lodz in charge of education, sport and EU funds. In autumn 2007, she was elected a Member of the Polish Parliament from the Civic Platform list. She served as the Deputy Chairman of the Special Commission “Friendly State” for matters related to the reduction of bureaucracy. On December 13, 2010 Hanna Zdanowska, after the victory in the elections for the local government was sworn for the position of the Mayor of the City of Lodz. She was elected for a second term by the Lodz inhabitants already in the first round of the elections in 2014.