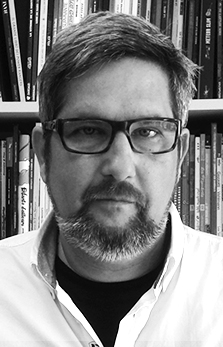 The Director of the International Festival of Comics and Games. Graduated Tadeusz Makowski School of Fine Arts in Lodz and graphic art at the Strzemiński Academy of Art in Lodz.  He has been organizing comic festivals in Lodz since 1991. He also produced and co-produced many live concerts, exhibitions, cultural and entertainment events both in Poland and abroad. In 2013, he opened the first Polish official institution devoted to comic art – Lodz Comics Center (as a part of House of Literature in Lodz), inspired by the Belgian Comic Strip Center in Brussels, with which he frequently collaborates. He is also one of the leaders of the EuroComics Association that combines within its structure the most important European comics festivals. He is currently the head of the Comics and Interactive Narratives Centre at EC1 Lodz – City of Culture in Lodz, which purpose is the co-realisation of the International Festival of Comics and Games in Lodz, as well as the creation of a modern center dedicated solely to comic art and contemporary narratives in video games.